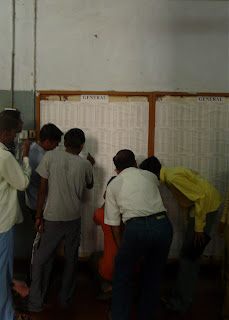 It's official: I am privileged. I was born in the right part of the world. Well I knew some of that already, but there was a recent new development.

When I came back from lunch and walked through the hallways of the medical college today, I saw this crowd anxiously examining a huge list on the wall. "It's the merit list" I was told by some of the residents in community medicine. Once the students graduate from high school, they are ranked on the basis of a combination of their marks in high school and an entrance exam for Pre-Med. That "merit list" is then used to decide who gets in the various medical schools of the state. Those with the best rank will be accepted in the best school and as the rank goes down, some will be accepted in other medical schools. But after the top three percent of the list has been accepted, there won't be any opportunity to become a doctor.

Unknown sa…
Thank god you were not born here. Not bothered about your career. But was just thinking of the loss the epidemiology would have suffered in your absence. Just kidding.
But thank god you are in public health. Afterall inspiration does count in anyones life.
8:31 em

sobhan sa…
I can see myself among the crowd. It was some 25 years ago only in same fashion. Nothing changed very much.
6:33 fm