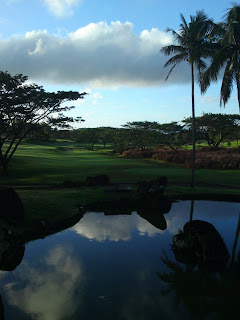 This golf resort in the Philippines is quiet and green and during the morning runs, there is a lot to be seen, like the school kids waiting at the local shop. But I miss my Chinese classes. It’s weird. Maybe in an weirdest way, it’s the characters that I miss most. I miss reading. I miss going out in the street and looking at characters. Even though most of them still do not make sense to me at this stage.

When I first learned a bit of Chinese in 1988, I did not do so for practical considerations. I had never been to China and had no immediate plans of doing so. I started because I was fascinated by characters. Their simplicity, their graphic elegance, their mysteries, the power they had to convey meaning.

Characters hold the secret of the chinese language. It’s the source code. The one who would want to skip them to learn conversational Chinese will have a major blind spot. They are the window on a world of difference in which the relation between language and message is encrypted differently. They tell us how far our human brains can differ from East to West. But by the same token, these extremes in human genius may point to what may be the common denominators of our minds once you put aside candid, unimportant considerations like how to you convey communication in the everyday life. 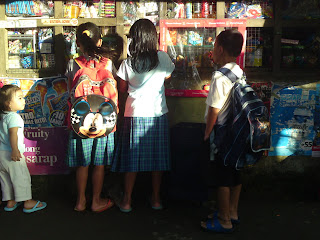 Chinese characters are pixels of broad concepts. The concepts are so broad that often, the teacher won’t even try to define them. The only way to grasp those is to guess. What is the meaning of 化（hua）？ I am still struggling and my teacher won’t say. It’s stands somewhere between flower, nature and civilization. But sometimes, the concepts are relatively easy to capture. 出 (Chu) is the broad concept of “going out”. 口 (Kou) is the broad concept of mouth, orifice, opening. Now the secret of the Chinese language is that by placing two very broad concepts next to each other, you get a precise word. 出口 means “exit”. That’s what’s written above the emergency doors of airplanes. Trying to make other words with 出 points to how broad the concept is. 生 (Sheng) is the idea of “life”. 出 生 then, coming out to life, means birth. 国 (Guo) is the idea of “kingdom” “country”, 出 国 is an international travel. So in Chinese, if you write “exit”, “birth” and “international travel” these words comes in two characters, fifty percent of which are 出.

When Chinese people talk among themselves and want to refer to a character without writing it, the only way to do so is to mention a word that uses it. That is often done for proper nouns, like when people introduce themselves. If I want to say I am HuTing（胡廷)，since many characters are pronounced “Hu”, to describe my “Hu”, I need to mention another word that uses it: “My name is Huting, ‘Hu’ is the ‘Hu’ of HuTong” (It’s actually quite cool to have the ‘Hu’ of HuTong in one’s name).

Now concepts are concepts. They have no existence. 书 (Shu) is a broad concept of literacy and writing. 法 （Fa）is the concept of law and rule (It also happen to mean “French” because of a similarity of sound (Fa/ France) and probably because the Chinese have a huge sense of humour). So 书法, the rule of writing is calligraphy. Sometimes, people would tell you that 书 actually means book. That is half true. To take existence in the form of a book, 书 needs to become real with a “measure” word, a word that brings the concept to reality. 一本书 (Yi Ben Shu), one piece of literacy, is one real book. 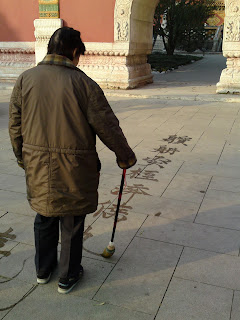 So the Chinese characters are like legos. And as such, it does not make too much sense to look at them individually. What would be the point of admiring one lego indefinitely? The only way to learn them and

love them is to use them and build toys. Hence, in another layer of difficulty, some people know characters but have a hard time combining them for use. It’s by making words that the individual pieces of lego make sense.

On my way to the airport the other day, I happened to get a ride from some legendary Beijing taxi driver who got a newspaper article written after him for being the most tourist-friendly cab driver of the city. We talked about Beijing and I mentioned that the previous Sunday we had been to BeiHai park and that we had seen people writing characters with water on tiles on the floor. “Ah! Yes” he said. “DiShu!” “DiShu?” I said. I was so happy I might have understood it that I needed a check. “Shu” had to be the 书 of literacy. But “Di”? Could it be the “Di” that conceptualizes the ground, the earth, the soil? So I said: “ DiShu? Is ‘Di’ the ‘Di’ of 地铁（DiTie, 地铁, the rail of the soil, the metro)?”. “Yes!” he said. “That one ‘Di’ ”! Of course! 地书！The “ground calligraphy”! It makes sense! It’s great to play with legos. I have a bit to do with the 300 characters I know. But I have been warned: Most foreigners have a hard time learning more than 1,000 and it takes at least 2,000 to read the news paper. Chinese is as daunting as it is fascinating. And what’s worse is: What I have written here, I am told, in only a partial reflection of the truth. I don’t care though: Let me play with my legos, that delusion keeps me learning at least.