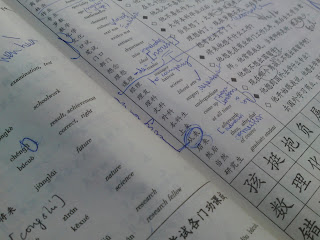 There are two classical methods to learn how to read in the West. One is called the global method: It’s about memorizing words as a whole. The other one is called the analytical method: It’s about learning the rule of combinations: B-A= BA etc. While many Western countries now use a combination of the two, some languages may be more prone to one or the other. English being so unpredictable in terms of spelling is adapted to the global method. Spanish that is completely stable in terms of you read what you say and you say what you read can make a good use of the analytical method. In French, of course, we have as many stable rules as we have exceptions. It’s our national curse.

Learning reading Chinese, at least the way my method works, is based on a super-global method. The book is structured around individual lessons of two pages that revolve around 30 characters. The first page is about leaning a specific sentence, with the help of pinyin, the transliteration of Chinese in latin alphabet. Each lesson first reviews individual characters fast, with their meaning. Then, the characters are combined by two or three to make words. Then, these words are used to make one sentence. There is where we pause: That sentence is read, read and read again until almost known by heart, using this ritual sentence from the professor: “Repeat after me, meanwhile, think about the meaning” (I bless my Chinese teacher for doing this for hours, because it must be as painful for her as it is for me). The idea is to create that bond in the mind between the characters and the meaning. Chinese characters are ideogrammes that are detached from a specific pronunciation. In fact, the same characters read by Chinese, Japanese and Cantonese persons would lead to completely different sentences. So the bridge gets established in the brain between an image and a meaning. Unlike we, westerners, we see a word and we read it in our head, people reading characters will not read the character in their head, they understand the meaning. It is a little bit like if they were reading pictogrammes. If you see a “no smoking” sign, you do not hear “NO-SMOKING” in your head, you just understand you should not smoke. Likewise, the Chinese who read characters have the meaning sent directly to the brain (In a scary way, it has started to happen to me for characters I know but for which I have forgotten the pronunciation). Incidentally, the Chinese have two words to read: One is read aloud (Translate aloud to oral language) and the other is read in your head (Obtain the meaning for yourself). Once the magic sentence of the lesson is known, we go to the second page of the lesson.

In the second page, the pinyin is gone. There are three sections. The first part (my favourite as a fan of legos) takes the 30 characters learned and re-arranges them as different words. The trick is that the pinyin is gone. Hence, it provides the words of two or three characters and the meaning in English to wean the student of the pinyin support and further bridge from character to meaning. The second part contains short texts in characters with no translation as reading exercises (“Repeat after me, meanwhile, think about the meaning”). The last one, the toughest, lists the 30 characters of the lesson on a table. Those have to be read individually, first in the natural order of the sentence that was used to learn them (easy) but at the end, at random (ouch).

The magic of this learning process is that you learn to read from a sentence to a character and not the other way round. Interestingly, many foreigners are entertained by characters-focused reading lessons that give the entire history of the character and explain their graphic patterns. I am told that people learning that way end up sometimes knowing many characters without being able to recombine them in words or without being able to read them fast in a text.

So in the end, the concept of reading is just completely different. Hence, if your child is dyslexic in the West, consider sending her/him to China to learn a language for which s/he may not have the same problems. Even the concept of literacy does not apply in the same way as it is no longer dichotomous. It’s not about knowing how to read yes or no, as in, knowing the code or note=. It’s about the number of characters you know. Literacy in China is a continuous variable.