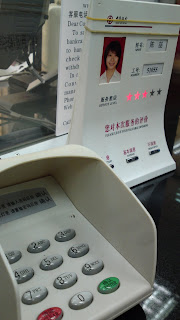 Going to the bank is quite an expedition. I had a Chinese lesson dedicated to the topic of changing money and banking. The story went as a conversation that went like this: "A" wants to change money and says he will go to the black market. "B" says: "Why? It's dangerous". "A" replies that at the bank, you need to wait and fill a lot of paperwork. "B" says that yes, it's true, but the black market is illegal and you might get busted by the police. "A" realizes that it's bad and therefore decides to go to the bank.
Well, it sounds funny, but it has to be a real life story, along with the other lessons in my Chinese classes about people preparing for university exams, people going to the restaurant and choosing food in menus that have too many items and people visiting the Beijing zoo. Going to the bank is a real expedition. It involves taking a ticket, standing in line, waiting, finding the counter, explaining to the employee, re-explaining to the supervisor, showing your passport, typing your PIN code, re-showing your passport, re-tying your PIN code, filling the form, signing the form, clarifying the names from latin spelling to characters, clarifying the amount, confirming the amount, confirming the transaction fee, re-filling another form and re-signing the other form. Fifteen minutes later, if you are lucky, and if there were no major misunderstanding, your money might have been transfered, at which point the employee will give you back your passport, the form, your receipts and various stubs of paper harbouring various red rubber stamps and signatures. Thanks god, you are done!
When it's all over, the employee, most often a tiny timid smallish young woman, asks you politely to rate the service with an electronic voting device (Photo). At that point, one only wishes to push the "satisfactory" button to be allowed to run away. Well, it's not like there are many options. There is only: "Dissatisfied", "OK" and "Satisfied". Maybe if there were to add another button saying "Oh god, next time, I am going to the black market" they could have different results. But who would go to the black market when the language class reminds you that you can get busted by the police?