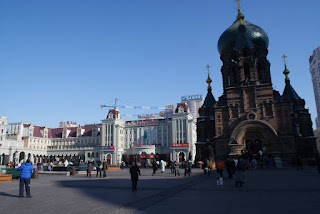 We had heard about it as children as Manchuria, the Chinese call it “Dongbei”, the Northeast. It’s a piece of land that pushes into Siberia along the North Korean border, vulnerable to the foreign influences, so over the years, the Russian and the Japanese alternatively came and left influence and memories of different natures, from good to terrible (Japanese experiments on human subjects). In this area of the country, back few decades ago, China was not so trusting about its neighbours. So, the Government constructed all kind of bomb shelters in the city center. Those have now been recycled as underground shopping centres that sell all kind of goods, including weapons that look like they were not only designed to protect oneself from the Siberian tigers.

Today Harbin is a place that makes you permanently wonder where you are. While the characters everywhere remind you of China every minute, the Orthodox Church makes you wonder if you are not in Russia. It was restored as a photographic museum of the city, showing the transition from the fishing village along the river in the 19th century to a frontier city. The Russian also left a main street with pastel colours-European style building, various restaurants and shops where one can buy a whole selection ofRussian items, including chocolate, dolls, knifes of sorts and optical. Do come over here if you consider buying a telescope: the offer is so large that they have to offer deals. 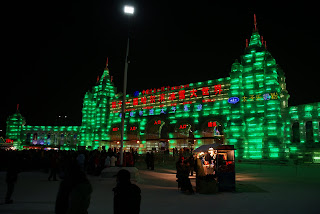 The January cold of the Heilongjiang province makes Beijing look like a French Riviera where old people would go to warm their old bones under the sun. You can get calories to fight the cold in the street in the form of nuts, dry fruits and caramel-coated fruits. The river is frozen solid (which apparently can trigger disastrous floods in the spring) so in addition to be used as an extra temporary expressway for cars, the city uses it for various winter ice sports, including ice skating, ice chairs, horse cart trips and other polluting bad ideas we won’t even mention by fear of unwillingly condoning them. If you google the name of the city, you will come across the Harbin Ice festival of January. Having been told it was a display of a few ice sculptures in a public park, some of 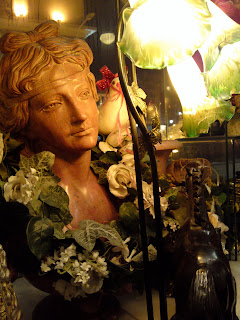 which of the size of a building, we went out there at night expecting some artistic sort of display of various animals made of ice, with maybe a small Orthodox Church. We would not have been surprised to see school children proud of a replica of a rocket or an artist proud of his mermaid. However, upon arrival, we found a Las Vegas style gate of imposing size, all in ice, lighted from the inside with bars of neon delivering garish colours to attract hordes of tourist ready to pay 200 RMB (20 Euros) for the show. We took a few pictures of the tacky, wondered who would pay that amount to go through two hours of that and decided to pass to go and hide in one of these Russian coffee shops. In that Babelian haven, the Russian-speaking Chinese waiter was teaching Chinese language to his Siberian colleague, who, despite his Asian look, could not speak a word of it. Not only the Borsht was awesome, but we got to look at various family artifacts nicely displayed by the Japanese couple who owns the place.

sobhan sa…
Thanks for the virtual tour. I am just feeling that I reached the place.
7:23 fm