Expose what? Exhibit what? Country pavilions… 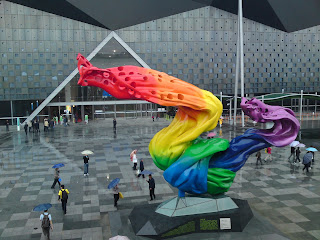 It seemed a bit vague. Would they really address the official theme of the expo, which was "better city, better life?"

So off we went, on a biased selection of the pavilions for a one day visit. Our main criterion was utterly utilitarian: We chose those with no or short lines. Hence, it was clear from the first minute that we would not visit the magnificent, omnipresent large red Chinese pavilion. It takes advance reservation, and even with that reservation you have to wait. But, who would come to the expo to see when it is every day around the corner?

So the selection was full of surprises.

did not work on its architecture. It as just a hangar vaguely painted, with lots of free space inside, and an interesting review of the holy Buddhist sites of the country. In the middle stood a few craftsmen demonstrating their skills in weaving and gemstone cutting. Those had obviously been flown in few days before from and took the close attention from the Chinese crowds with a bit of bewilderment.

was full of contrasts. There were a few holograms of the historical g 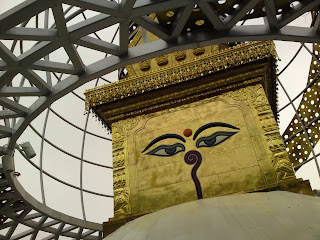 ems of the country projected onto water mists, but most of the show was made from faded out Technicolor pictures of the various political highlights of the country, including, of course the friendship between and . On the upper floor, a gallery of the pictures of the strong women of welcomed the visitors. Of course, one would not place beauty on the top of the list of the criteria as true feminists activists would not want to be pictured as the girls on the cover of 'Elle' magazine, but frankly, they could have obtained better pictures of these heroines. Towards the second part of the second floor, the smell of Penjabi cuisine started to flagrant the air. That came form the restaurant downstairs next to which a carpet shop was set up. Maybe it was a bad thing to ask for a few roll outs while I sort of knew I would not buy anything, but the temptation was to strong. Few carpets on the floor later, it really felt like the intimate top floor of a carpet dealer.

And here we went on, from (half Hindu, and half Buddhist), to Hong Kong (vibrant 3-D movie), via (with a Kiwi forest on the floor), (lots of money, little to show) and where a sculptor was finishing a replica of a Khmer statue for the scaled down replica of . They all had their souvenir shop, they all had their food joint. Somehow, that may have been the best part. It was off line real life globalization presented in a way the stomach could understand.

The disappointment of the day was the French pavilion. It started with a traditiona 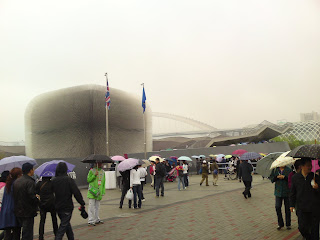 l dance of the type listed on the list of endangered practices in since they have become so weird and so rare. Then, a long descent through large video screens explained that the French know everything about the 'sensual city' because they know, like no other people on earth, how to look sexy and glamorous while sipping a café on a terrace in . There were a few shots of French cities with digital effects showing buildings invaded by green plants, probably as a token act of militancy in ecology while the French government can continue to forget its commitment to sustainable development. Out of the blue came the Michelin tyres and Lafarge cement advertisement booth (slightly less sensual than the coffee sipping bit), but thanks god, the mini Louis Vuitton catwalk (performed by a Chinese customer, pardon me, woman), brought back the idea of French romantics in a way yuan-loaded economic growth-filled purses can understand. As a finishing note, the exceptional Musee d'Orsay showed seven exceptional masterpieces loaned from the exceptional country of to the exceptional expo of . After all, between exceptional people, we can understand each other. The best proof was the languages used in the pavilion: French and Chinese only. No trace of English. So if the visitor is not an exceptional speaker of an exceptionally complex language like French and Chinese, s/he is left with the glamorous café sipping images only.

The surprise of the day was the Indonesian pavilion. A simple, open architecture, with lots of wood and bamboos, and a welcome by a quantified explanation of the fact that while Indonesia is just 1.3% of the world's landmasses, it accounts from a double digit proportion of biodiversity in terms of plants, fishes, mammals, reptiles and amphibians. It then took the visitor up explaining the need for biodiversity, and moved on to diversity in general, whether ethnic or religious. The display of art was stunning, with a diverse s 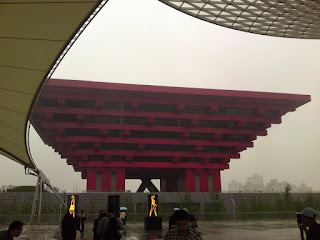 election showing the raw delicacy of Indonesian art, somewhat half way between Africa and , as the Pithe-canthropus was. It tactfully paid tribute to the Chinese admiral Zheng He, to whom owes Islam and finished on the note of 'diverse city'. Finally, the souvenir shop sold fashionable handbags made of recycled trashed commercial wrappings, thanks to the work of an NGO that empowers rag pickers to fight poverty.

Altogether, as the day when on, between a moka coffee in and a masala chai in , it sort of became apparent that the way you chose to show yourself to others may say more than what you actually show. At that time, the feet were sore and the rain heavy. We walked out, followed the shuttle, hoped on the metro and got back safely. Kudos to Shanghai that demonstrated its skills in logistics, without an explicit pavilion on the subject.