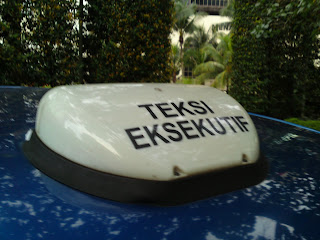 The first time I had been to Kuala Lumpur, it was on a trip from India. At that time, immersed as I was in South Indian culture, I was really curious to see how the masala dosa tasted at Saravannah Bhavan and whether the people would shake their head just like in India. I remember being puzzled by a combination of similarities and differences that were just too intermixed for anyone to keep track of.

This time, coming from Beijing, I was just not sure what to expect of whether I would even looked actively for anything. The only plan –in addition to work- was to check out the Cameron highlands and to relax through watching a lot of green at the tea gardens. So I had asked the hotel to organize a day trip. When I came down, the morning after my arrival, I went to the concierge desk and asked. He said that the driver was a bit delayed because of traffic but that he would be there soon. I went to my room and waited my “executive taxi (Photo)”.

It was not long. A phone call and I walked down. Ben (国民), the driver, walked to me with a surprised face:

-“Well, I come from Beijing and I have a Chinese name, but it does not make me Chinese!”

-“But can you speak Chinese?”

That is how it started. And those were the last words spoken in English. He first asked for my name, asked me which characters those were, and then he decided to call me “胡 先生”，that is, “Mr Hu”. We talked about everything, about food, about the price of things (as soon as I came back from a hair cut, he asked me how much I had paid for it, concerned that I could have been overcharged), about life, about our ages, about our families, about China, about Malaysia, about simplified characters, about non-simplified characters and about the traffic. We went to pick strawberries and we went to drink tea. We laughed and we joked. We went up the hill and down the hill. It was fun, but it was the last thing I would have imagined. A full day of Chinese language practice in the middle of Malaysia. Well. Almost a full day. He tended to get angry with the other drivers on the road. And he swore a lot. In English. Things that cannot be typed on a blog.

WHO in the field