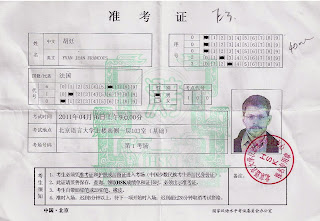 The last time I had taken an exam was 20 years ago... I had forgotten about most of the protocol, the sealed envelopes, the electric nervousness and the rest. But that was not what made the HSK (Hanyu shuiping kaoshi- The standardized Chinese language test) a memorable day. What made it a fascinating experience was the feeling of penetrating the textbooks in which I had been learning Chinese in the last year and a half or so. In fact, a lot of the books published to learn Chinese are published by the "Beijing Language and Culture University". Most of the texts and stories revolve around various foreign students who are in Beijing to learn Chinese. Hence, the stories tend to repeat themselves. At the beginning of the various books, the students introduce themselves. The Korean is there because the boss sent him to China. The Japanese woman wants to learn Beijing Opera and the French guy just wants to make Chinese friends. Throughout the lessons, they have classes, fold dumplings, play soccer and prepare food with Chinese friends. At some stage of chapter 10 plus, one systematically fall sick and ends up in the hospital (to get injections for a common cold!). Three lessons before the end of the term, they go sightseeing in China, and at the last installment, they all go back to their countries, sad to leave each other, but feeling that China is their second home. They are called Mali (Mary) or Davei (David) when they come from the West, not to mention the American born Chinese who speak Cantonese but cannot write a single character. All this gang intermixes in the campus of what sounds like Beijing Language and Culture University turned into a sort of 'Alice in Wonderland' since everything happens in a nice world where the syntax is correct but the vocabulary rudimentary.

So the fun part about HSK, is that you need to go to Beijing Language and Culture University to take it. And guess who is taking the test at the same time? Well: Dawei, Mali and the rest of the crew. For my session, there was a Turkish girl, an Italian women, a man from the Gulf with two veiled female friends, few loud Canadian University students, a middle-age professional German guy, a young Western boy (from some international primary school in Beijing, maybe, taken by his father) and two big African guys who wore they jeans low and their earrings heavy. In terms of age, I was probably the outlier, fitting right there on the right hand side of the Gaussian curve. In one word: Babel.

The clock stroke nine and we started, listening first, then grammar then reading comprehension.  At time, one asks oneself where they get their texts from (Topic: how to buy bookshelves for old people???) but that only last two hours and 15 minutes, and once the test finishes, these mysteries are soon forgotten. There is much more interesting happening actually. Like Babel suddenly busy talking. And guess what? They talk in Chinese. Their Lingua Franca is Putonhua [The common language, Mandarin]! God failed on this one: These people of all sort, ages and colours all speak Chinese, HSK level 1-3 to be precise, and they do so using words borrowed from the tapes of Dawei, Mali et al. This is the moment where I realized that these guys exist in reality and that I entered their world for a few hours, before cycling back home through the dry sandy winds of the spring in a Beijing carpeted with flowers. "Life is otherness", as said Fernando Pessoa.