The pleasure of preparing for HSK

april 06, 2011
The standardized test of Chinese language, the HSK, is prepared through a number of specific books, called "Boya Chinese" {Standard Chinese}. As much as one needs to get ready for the complexity of Chinese grammar, one also needs to get ready for the weird logic of the exam. So while practicing with the book, I recently had the pleasure to experience how high Chinese teachers like to set the bar when grilling their students. So, as we were doing exercises on the book, we came across a picture that had to be described using an "existential sentence", a structure which in English would read like: "On the table, there is a vase of flower". The picture looked like this, and had to be described with a similar sentence. 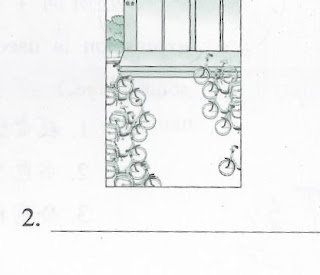 So, looking at the picture, i prepared my sentence and said "On the parking lot, there are many bicycles". Although the sentence was grammatically correct, my professor cut me with a loud voice and said: “不对” [Budui!] which means: "Wrong!" So i asked: "What mistake did i do?" Then, my teacher replied: "Look at the picture better, on the building at the back, at the top left corner, there are two characters saying: “宿舍" ［Sushi, Dormitory］. So in fact, the sentence should be: "In front of the dormitory, there are many bicycles".
I looked at the picture. I looked again. And then i realized there WAS indeed two characters on the building at the back. As a matter of fact, the microscopic dot on the building, when magnified 400% twice with a photocopier, turned out to indeed say "“宿舍"". 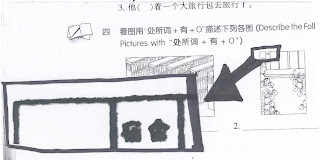 Conclusion: Chinese language is not easy, but compared with the difficulty of preparing for the test, it's a walk in a park!