juni 24, 2011
As Bob says it: ‘Taxis are a great way to get around Beijing. The only problem is that they are water-soluble’. The minute it rains, they vanish as if they had dissolved into the gutters. So Thursday in that respect was not a good day. After a few days of the heavy, polluted gray skies, suddenly it started to pour around 4PM. At 9 PM, after a dinner that had taken me a bit far and through circumstances that forced me to leave my bicycle behind, I ended up really stuck. All the taxis were full. You know that because the red light behind the windshield is off. Normally, there is one with the shape of characters meaning ‘kong che’[空车], Empty vehicle. If you see the red characters glowing, the car is available. That is easy to spot from far away on a rainy night. But in that case, it was rather easy to spot that none of the cars were free. 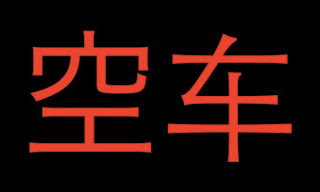 Until that car showed up. I could see the red light from far away through the thick drops of rain. But when it came closer, I thought the car was rather small. When it stopped in front of me, I could see that the red light was in the right place, but it did not have the shape of a character and it did not say empty vehicle. It was just meant to simulate it. I had stopped my first pirate taxi. OK, normally I stick to the rule, but maybe rigidity also is water-soluble. I jumped in before I completely dissolved in the deluge. The driver switched off the red light and hided it quickly behind the visor flap. After a quick negotiation (Of course there was no meter!), the conversation started. “No, no! I do not do that regularly. I work in the office. But the evening, when it rains, I know people need transport, as the taxis are too busy. So it’s a good way to make money. We all need money, you know.” I arrived soon at destination.
The next day, I debriefed the situation with my Chinese teacher. These are called the black cars, ‘hei che’ [黑车]. ‘They can be dangerous at time’ he said. ‘They do not dare to come to the city centre normally, but in the suburbs, they are common’. He really said that in a tone that made the suburbs sound like ‘where the wild things are’. And he added: ‘But when it rains, they know there is a need so they come downtown’. When that happens, the limits between the clean central Beijing and its massive informal suburbs are blurred. Probably the contours of the city, also, are water-soluble.