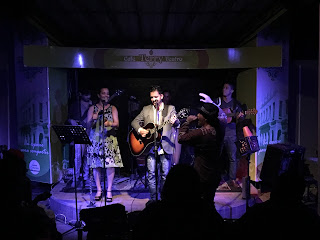 As a traveller, approaching the life of Cubans is not so easy. Economically, two worlds live in parallels: The world of the national currency (CUP) and the world of the convertible peso (CUC). In the street, everyone can be smiling, pleasant and polite. But in the end, most Cubans won´t enter certain shops and most restaurants since the coins in their pocket cannot buy what is sold there.

Homestays at the ‘casa particulares’ definitely gets you into families physical inner circles. Owners are very friendly and call you “mi amor” within hours. Yet, the business nature of the relation and the disproportionate value of what the convertible pesos can bring into a home budget colours the interaction in a way that seems hard to avoid. Subtlety investigative questions probe for all future activities to try to recommend transport, lodging etc. So what are the ways one gets closer to a people that must have so much to share on the way their political system bring them free education and health care but without much disposable income and freedom. But it seems though that culture is also considered something that needs to be accessible to all.

From the beginning, Cienfuegos felt like a city much different from Habava Vieja or Trinidad. The place is buzzing with activity and people go about what they have to do without waiting for CUCs from tourists. When I heard that the coffee shop next to the imposing classic theater had live music after ten, I really wanted to give it a try because it did not look that it was something that would be done for visitors.

It started with a cover fee enforcing a tear pricing policy. Like in the museums, everyone pays with her/his currency. So if a foreigner pays two convertibles, a Cuban pays two nationals, twenty five times less. There are not so many foreigners though. I could only spot two middle age blond British women travelling alone and who look like they spend more time at the opera than in music bars. And then it starts.

The band is diverse in every aspect, ethical background, age, and gender. But they are all so intense and professional at making sure everyone will have an incredible amount of fun. The woman strikes me as strong: she is at an advanced stage of her pregnancy, sings with a beautiful alto voice, plays flute admirably and does the talking as someone in charge. Around the band, it quickly gets wild. The mojito and beer-drinking crowd is of course as diverse as the band. The playlists includes Cuban classics (Cha Cha, reinterpreted) and oldies from the Nueva Troba (“Que manera de quererte”). An old black man with a coloured suit and a straw hat appears as if he just walked away from the “Buena Vista Social Club” movie. He congratulates the band and hugs the musicians. Every body starts dancing. The rest of the evening cannot be written but only sung and danced. Suffice is to say that if the evening does not answer all questions, it gives a good starting clue.